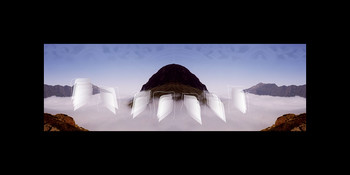 The Silence collection; digital images made by Joke Ziekenoppasser
written by Hein Walter

When you take your time to watch the collection or in other words, when you are able to absorb the peace and quiet of this collection, then you will sense why these series are called Silence. The wide, arcadian landscape with clouds, distance and space is filled with emptiness: no person, no movement, no wind, no tiny bird to disturb the silence.

It is a living landscape but at the same time there is no sign of life.
The landscape seems to have been elevated, placed beyond time.
Aided by an artistic fingerprint nature has succeeded to grow beyond itself: this is nature that has outgrown itself. Miraculous,  mysterious. Is it divine?
I would rather see it this way: the terrestrial  world  has been shown with such depth that it can reach the sky.

Joke Ziekenoppasser’s digital paintings are layered. There are meanings that can be unveiled and determined, but it is especially an inexplicable  force from the depth of the work moving to the surface. Or is this movement the other way round:  that you feel drawn inside? Or again: the work is  imposing and inviting at the same time. You can reach it and still it is intangible.

It is two-fold: it is clearly visible and nevertheless  very well hidden - the moment you would like to discuss the content or you would like to study it in depth, this depth seems to lock itself away: no trespassing. The technique used for this work, fully fits the layers and hidden meanings of - computer programs. Those programs  do actually work with  layers.
You start with the first layer, for example a photograph of a landscape, then you place a second photo on top, more or less transparant.
Then a third, a fourth et cetera. You can vary the order of the layers. Furthermore  you can also adjust the  colours  and shapes of each layer. In other words you can adapt them: no layer is final till the moment you decide to merge all layers to one unity.

Also the vulnerability is twofold. Literally because the unprotected work can easily be damaged. Figuratively because it is situated on the personal level, you have to be cautious with this. The three words of art I would like to discuss, S1, S2, S3, invoke a religious memory. Although no explicit use is made of the signs and the language of whatever religious tradition, they are implicitly  connected.
They remind me of the grandeur of the old testament: the silence breathes religiousness  and is almost too  fierce.

The world we are encountered with shows a contrast between heaven and earth, dark and light, solidness and fluidity, but also between the visible and invisible,  invited and excluded. In between is silence. there is tension. Do you belong or not?
Do you want to cross the border or not?
Hesitation, silence, Silence.